After weeks of back and forth, EOS [EOS] has pushed out competitor coins and has confirmed its position among the top 4 cryptocurrencies in the global market. The recent price bump on February 12, has pushed the price of EOS up by a whopping 7 percent over the past 24 hours which has resulted in the coin breaking into the elite four of the coin market, joining the likes of Bitcoin [BTC], Ethereum [ETH] and XRP.

Litecoin [LTC], which saw a massive 30 percent price increase on February 8, is the coin that makes way for the bullish EOS as the former’s market cap is now trailing the latter by just under $40 million in the race. Also left in EOS’s wake is Bitcoin Cash [BCH], a coin that had long held the 4th position and which now finds itself in the sixth spot behind Litecoin by a market cap of over $450 million.

EOS has well and truly made up for its January slump which saw the price of the coin get slashed from $2.95 to $2.25 i.e. a 23.72 percent price decline in a matter of 4 days between January 10 and January 14. During the same bearish period, the coin’s market cap fell from $2.67 billion to under $2 billion and the coin closed the month off at a market cap valuation of $2.103 billion. At the end of January, EOS was neck-and-neck with Bitcoin Cash [BCH], in terms of market capitalization. 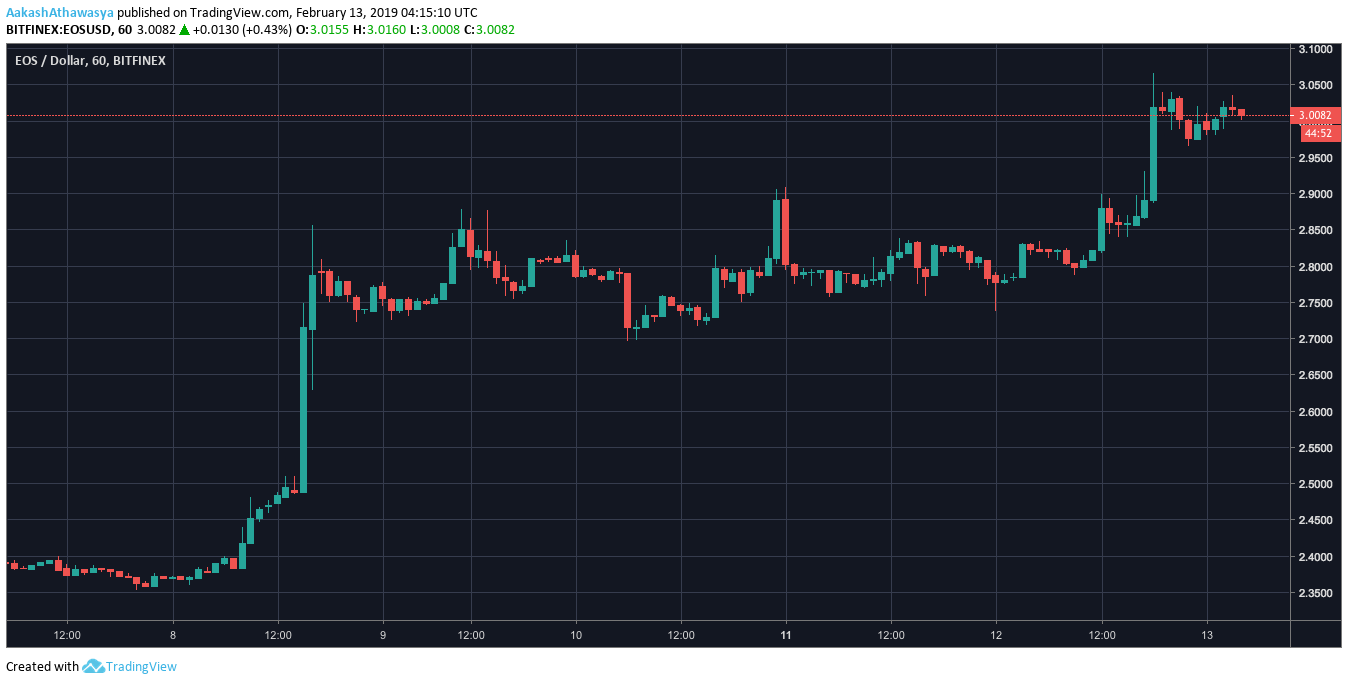 February, however, started off in good stead for EOS, with the coin’s price rising by a significant 18.37 percent from $2.34 to $2.77 and the market cap pushing above the $2.4 billion mark. This price boost was accompanied by a massive Litecoin push of over 30 percent in a 24-hour window, which saw LTC overtake EOS and Bitcoin Cash to take the fourth spot. EOS, despite seeing a consistent double-digit price increase had to settle for the fifth spot, which it held despite pressure from Bitcoin Cash.

On Wednesday, February 12, the coin saw a massive 7 percent price increase against the US dollar, which pushed the coin to $2.98 from $2.78 just a few hours earlier. This massive price increase also saw a spurt in the coin’s market cap, which now stands at $2.68 billion, whereas, less than a week ago, the market cap was just above the $2.1 billion mark. This collective increase saw EOS overtake Litecoin only 6 days after the coin overtook 3 coins in succession to take the fourth spot. Litecoin is currently trading in the green however, its 24-hour increase against the US dollar is nowhere near that of EOS. The price of LTC has marginally shot up by 0.58 percent and the coin is now priced at $44.04, with a market cap of $2.66 billion. Despite the relatively smaller gains of Litecoin, the fifth largest cryptocurrency in the market has seen its price increase from $33.07 on February 8, by a mammoth 42.39 percent to $47.09 as valued at the beginning of trading on February 11.

Bitcoin Cash [BCH] has been left in the wake of the aforementioned two coins, languishing two spots below, taking the sixth position on the global coin ladder. Bitcoin Cash fell out of the top 4 on February 8, after both EOS and Litecoin saw double-digit surges. At press time, BCH had managed to rise against the US dollar by 3.23 percent and is priced at $125.62, and is second-highest gainer in the top-10, behind EOS. Bitcoin Cash posted a market cap of $2.2 billion which is $450 million behind that of Litecoin and $475 million behind that of EOS.