The NEM Foundation You Knew Before Is Gone,’ What Is Next As part of the closing statements in an open announcement to the NEM community, the NEM Secretarial Office, which represents the voice of the NEM Foundation’s executive committee and council, said in “one final message for all” that the NEM Foundation community members knew before “is gone.”

The announcement was made in an effort to stay true to their commitment of transparency and pulled back the curtain on a number of sensitive issues, including an acknowledgement that the foundation is facing severe financial difficulties and a realization that the previous organizational structure failed.

A financial audit was reportedly done after the current NEM Foundation leadership team took office on Jan. 1, 2019, which revealed that they are running low on XEM (the native currency of the NEM blockchain platform) and fiat funds.

NEM Foundation’s financial situation has deteriorated to the point where they only have one month’s operational funding left in reserves, as of Jan. 1, 2019.

Since the announcement was made, concerned community members and investors posted questions to the executive committee to try to get to the bottom of what happened. With information coming through sporadically, current NEM Foundation President Alexandra Tinsman confirmed to one particularly vocal community member, Jelin1984, that they have to cover all their bases legally before releasing additional information.

“Please know I understand how confusing things look and we are working to communicate all information to you and the community in a timely manner. Part of this means we have to take extra steps to ensure we are legally and correctly sharing information — this takes time to do.”

The NEM foundation was started in 2017, two years after the launch of NEM (XEM), an out-of-the-box, enterprise-grade blockchain platform. It is based in Singapore and in charge of developing and promoting NEM. According to its website, the sole purpose of the foundation is to introduce, educate and promote the use of the NEM blockchain technology platform on an international scale to all industries and institutions.

NEM co-founder Lon Wong was the founding president of the NEM Foundation until his resignation in early April 2018.

Since April 2018, Kristof Van de Reck served as the interim president of the NEM Foundation until Alexandra Tinsman was voted in as president on Dec. 14, along with newly elected members of the executive committee and council. Of the 202 eligible voters, only 148 voted, due in part to the issues mentioned above.

Although Tinsman repeatedly stated that the NEM Foundation operates as a separate entity to the NEM blockchain platform, the actions of the NEM Foundation have an undeniable impact on the price of XEM, as pointed out by community member Dan_V.

“I understand that the Foundation is not NEM, however it seems to have an uncanny ability to cripple most parts of it – whether that is through infighting, unprofessional behaviour by representatives of the council or just lack of direction for NEM as a whole.” 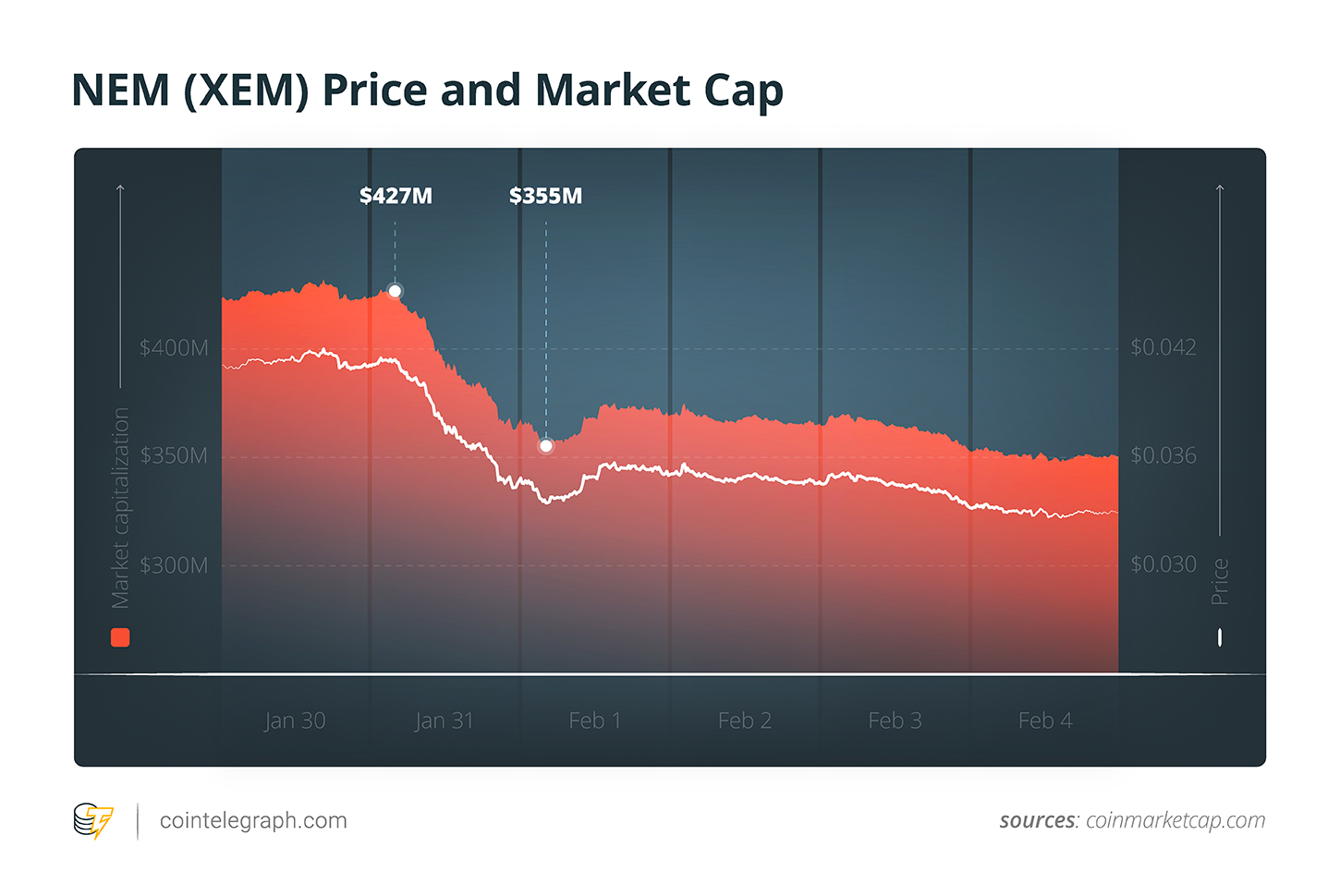 How did the NEM Foundation get into such deep financial difficulty?

The announcement touched upon some surface level reasons that led to the foundation’s current financial problems, including misaligned goals from key staff members, efforts being duplicated, inconsistent success metrics, little accountability for funds and a questionable return on investments (ROI). As a result, the foundation burned through 9 million XEM per month (approximately $350,000).

The “Crypto Winter” was another given reason, pointing to the long cryptocurrency bear run that saw billions being wiped off the crypto market as a whole since January 2018. However, community members took a more accusatory tone.

Jelin1984 accused ex-NEM Foundation President and NEM co-founder Lon Wong of taking some of the funds to develop another crypto project called ProximaX. The accusation is complicated by the fact that NEM and ProximaX continue to have a very close working relationship. In additional information released by the NEM Foundation, it also came to light that 80 million XEM (approximately $3.1 million) was spent between December 2017 and January 2019. Wong was president of the foundation for four of those months. Both Tinsman and Wong deny the accusations.

In a separate blog post, Wong addressed the whole issue:

“During my term as NEM Foundation President, I, along with the rest of the NEM Foundation Council, managed our funds prudently. We requested for only 50% of the fund that was approved to be spent for 2017.”

Tinsman addressed the accusation directly in the community forums.

“No one is accusing Lon of taking funds. Please don’t spread this misinformation. Lon Wong was a co-founder and the first President of the NEM Foundation which started in early 2017, two years after the launch of NEM. Lon left the NEM Foundation in April of 2018. Since that time he has been focusing on a project called ProximaX, in which is he the President. The NEM Foundation wishes Lon and ProximaX success in the future.”

“So sad, people [NEM Foundation employees] were using the fund for personal enjoyment and profit without regards to the project’s success.”

Again, Tinsman was forced to address the accusations:

“Hi, this is not true. No one was using the funds for personal enjoyment. There weren’t effective policies put in place in 2017 and 2018 that captured all data spend BUT from the records we do have, we can see that funding was mainly spent on marketing, events, salaries, travel and trainings. We have shared complete transparency with the devs on all the auditing from 2018. This is why the new NEM Foundation restructure was immediately put into place. The new policies and moving to a product-focused structure offers complete transparency to the community on how funds will be spent and allocated.”

“We can solve this.”

The good news, according to the announcement, is that the NEM foundation’s current financial and operational problems are fixable.

To do this, they have proposed a number of drastic changes to how the foundation is run and what its operational focus should be:

“So here’s where we currently stand. We have completely rebuilt the NEM.io Foundation’s operating structure and mission. We are hitting refresh and starting from scratch. This means a new focus under this new leadership and a NEM Foundation that truly exists to serve and support its powerful community.”

They are changing from a decentralized promotional organization, with regional teams that had a great deal of freedom, to a product-focused organization with more traditional lines of reporting. Foundation employees and contractors will now have to report to one of the seven product heads — which include a chief technology officer, chief of product management, chief financial officer, chief business development officer, chief operations officer, chief marketing officer and chief revenue officer.

In the spirit of transparency and accountability, the product heads will then have to report metrics and deliver ROI directly to the council and community. All funds spent will reportedly flow through the head of finance (CFO) and adhere to accounting standards.

The foundation will also be making drastic budget cuts, which include reducing the previous burn rate of 9 million XEM per month by 60 percent, putting all partnerships and projects on hold until further notice, and reducing the 150-strong staff headcount through planned layoffs.

All the changes are in an effort to move the foundation from promotional driven organization, including marketing and training, to a more traditional, centralized business model, driven by revenue and product development.

Plans have also been revealed to raise additional funding of 160 million XEM (approximately $6.2 million) through a proposal to the community — i.e., asking the NEM community to plug the funding gap.

NEM Foundation President Alexandra Tinsman has confirmed that a full report of the restructure and funds being requested is in its final stages of preparation and will be released to the community as soon as the core developers and legal teams have had time to review the proposal and audits.