Bitcoin’s Lightning Network implementation is going from strength to strength, but statistics about its growth make for interesting reading.

Bitcoinist regularly reports on Lightning’s progress, with the ecosystem now breaking new records on a weekly basis. As a technology which is still very much in its earliest phases, however, what does Lightning actually look like today?

The ‘size’ of the Lightning Network – the number of nodes relaying transactions, the number of payment channels and overall financial capacity – makes the press more often than other metrics.

At press time, this was no exception, with all three figures at an all-time high. 6370 node and 28,800 channels currently comprise Bitcoin Lightning mainnet, with a total capacity of almost 700 BTC.

In the past month alone, nodes, channels and capacity have increased by 15 percent, 33 percent and 28 percent respectively.

Who is behind such rapid expansion of Lightning? A glance at the statistics reveals various somewhat surprising facts. 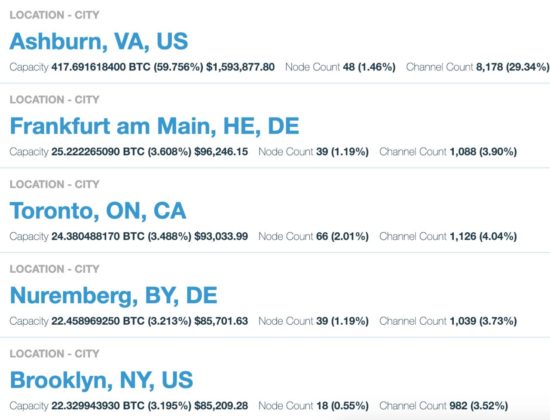 For example, while the US has the lion’s share of nodes and channels, along with almost 80 percent of capacity, the city with the most nodes is in fact Toronto, Canada.

Those Canadian nodes contribute a capacity value of 24.4 BTC. That makes Toronto third on the cities list; above it lie Frankfurt, Germany (25.2 BTC) and Ashburn, Virginia, where almost 60 percent of capacity is hosted.

Fourth place is another German city, Nuremberg, indicating that Lightning is already diversifying outside the US.

Other cities in the top twenty by overall contribution stats include Berlin, Hamburg, Singapore and Amsterdam.

As Bitcoinist reported, the past month has seen Lightning gain mainstream publicity few imagined possible even six months ago.

As a result of a transaction relay among users, Lightning Torch, Twitter CEO Jack Dorsey has publicily lauded the technology, even hinting it could integrate into his companies Twitter and Square in future.

The knock-on effects have included a social media lobbying effort to make Tesla founder Elon Musk participate in the relay, which itself aims to further awareness and understanding of using Bitcoin via Lightning.

Other efforts to boost user numbers have come in the form of consumer projects such as Lightning Pizza, which aims to allow anyone in the US, Canada and potentially Europe to order pizza using the network.

What do you think about the Lightning Network? Let us know in the comments below!